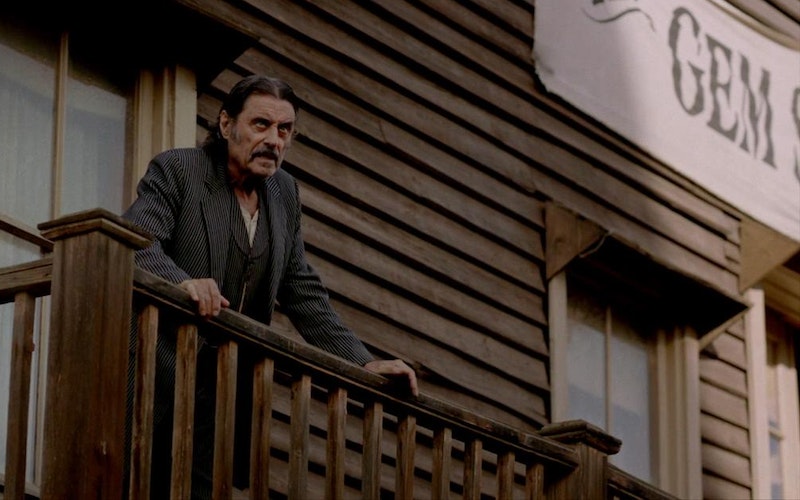 As before, the beloved cadre of flawed, complex, and now visibly aged Old West characters struggle to maintain community under the weight of their own moral transgressions. In bringing together a reunion of this lovable brood of blaspheming misfits, series creator and television legend David Milch reminds us how closely the grotesque lives to the sublime, and how God’s glory often flourishes in what one character identifies as “the least likely of witnesses.”

In Milch’s upside-down world, vice and virtue intertwine. (Spoilers ahead.) The most upstanding and highly respected citizens often prove to be the least redeemable human beings. Consider wealthy industrialist George Hearst (Gerald McRaney), now a California senator who returns to Deadwood to continue his lawless, psychopathic villainy. Conversely, nearly every hooker in Deadwood bears a heart of gold, and the most outwardly compromised characters consistently risk themselves to protect the least of these with Christ-like tenderness.

More than any other character, saloon owner Al Swearengen (gloriously played by Ian McShane) embodies Milch’s trademark duality. In Deadwood: The Movie, which Milch wrote and Daniel Minahan directed, we find Swearengen dwindled by a failing liver and diminished cognitive capacities. He barely clings to his status as crime boss of the little town he helped found. Every other word an unprintable profanity, the aptly named Swearengen has blood on his hands (and his saloon floor) several times over. And let’s just say blasphemy and murder are not the only commandments this brutal man has violated.

But Swearengen also oddly occupies an earned plot of the moral high ground within the Deadwood camp. If an injustice needs righting, Swearengen is the man to see. When his favorite former whore Trixie (Paula Malcomson) faces a long-overdue charge for a righteously inspired murder attempt on Hearst, Swearengen tries to protect her, as he did years before. Now enjoying a more-or-less healthy relationship with shopkeeper Sol Star (John Hawkes), Trixie gives birth early in the film. Near his deathbed, Swearengen enjoys a tender moment when the newborn sneezes on his bile-yellowed face. “That’s the Lord’s blessing coming upon you. That’s him leaning down to kiss your cheek,” Trixie remarks. Swearengen offers his own prayer-like reply, “Safe passage to us all.” The next day, Swearengen risks his rapidly diminishing health to give Trixie away to Sol at an impromptu wedding thrown in his saloon. Simultaneously wholesome and irregular, the sequence gently plays like a bizarro version of Father of the Bride. The tears are earned.

God’s glory often flourishes in what one character identifies as “the least likely of witnesses.”

If Swearengen shows us an evil man overcome by his inner good, Sheriff Seth Bullock (Timothy Olyphant) reveals a good man fighting his baser instincts. Now happily married with three young children, Bullock once again finds himself struck by lightning when his former flame, bank owner Alma Ellsworth (Molly Parker), comes to town. As before, every sexually charged exchange between these now middle-aged former lovers begs for consummation. When they find themselves in an embrace at Trixie and Sol’s wedding dance, both seem close to rekindling their adulterous affair. At the moment of decision, Bullock’s young daughter tugs on his leg in hopes of enjoying a father-daughter dance. Bullock, knowing how to take a divine hint, leaves Alma’s embrace and whisks his daughter away in a moment of paternal tenderness.

Near the end of the film, Bullock finds himself at another moral crossroads when an angry mob starts beating a handcuffed Hearst, whom he has arrested, in the town’s thoroughfare. Bullock could easily allow the mob to murder this evil man, and he’s tempted to do just that. But then he catches a glimpse of his wife (Anna Gunn) frantically shepherding their children away from the violent display. Like the honest lawman and good husband that he strives to be, Bullock overcomes his bloodlust and stops the beating, evoking 1 Thessalonians:5:15: “Make sure that nobody pays back wrong for wrong, but always strive to do what is good for each other and for everyone else.”

If Milch holds an opinion as to which side of good and evil his tragically flawed characters will ultimately lean, he tips his hand near the end of the film in a transcendent scene between Bullock and Samuel Fields (Franklyn Ajaye). Nearly beaten to death by Hearst’s goons, this former slave whispers from his probable deathbed a biblical paraphrase to the sheriff who tried yet failed to protect him: “The good book says the Lord chooses among his witnesses them be thought least likely.” Sensing eternity, Samuel continues, “What else they say about the Lord’s witness? Their defects notwithstanding, they testify to his wondrous glory.”

With a long history of addiction, and reportedly battling early onset Alzheimer’s, David Milch knows a thing or two about human brokenness and frailty. His work on television, from Hill Street Blues to NYPD Blue to Deadwood, has for decades reminded us that “God chose the weak things of the world to shame the strong.” From Noah to Rahab to David to Paul, the Bible brims with drunks, prostitutes, murderers, and thieves favored and redeemed by God. Extensions of these broken heroes prowl the streets of Deadwood. Their examples empower us to rejoice in a loving savior who forgives us our sins and purifies us from all unrighteousness. In Deadwood: The Movie, Milch has successfully and remarkably crafted what will likely be his swan song. His characters, like their sin-plagued biblical counterparts, ultimately testify to God’s glory, showing that even the gritty and profane can be redeemed.